Anatomy of a Haircut

Nurses are wonderful creatures (for the most part).

But they are not perfect either.

Unfortunately, I recently went under the knife TWICE in the month of June, in the year of our Lord two thousand fourteen.

Wasn't too pleasant on my part.

The first operation was the result of me falling down several times in one week's time. When my oncologist learned of this new "symptom" didn't he send me to directly to the hospital! The nerve of that man. I didn't even get to pass Go or collect any amount of dollars.

I went DIRECTLY to the hospital (aka Jail).

It was decided after many scans and such that I needed some major fusing in my lumbar vertebrae.

But lo! I recovered well from the operation and was up and walking  (with a walker) in no time. And the cancer pain that was excruciating and also making me fall down?

Yessirree! That hardware stuck in my lower back done did the trick!

They released me four days after the big operation.

But, something was still amiss because I couldn't function. Oh, I had no more pain, but I was so extremely lethargic and woozy. I couldn't even form sentences without dozing off after the fourth or fifth word. Witnesses claim that my eyes kept rolling into the back of my head and that all I did was sleep. I didn't eat, I pooped a couple of times IN BED, but that was about all I did.

Note to YOU: pooping in bed is NOT highly recommended. EVER.

So my husband knew something was very, very wrong and he called 911.

And then my room was crowded with all these men! Ugh. And they rough-handled me. They put an i.v. in my arm that HURT! And then they shuffled me onto a gurney and into a truck that I don't believe had any shock absorbers. I felt every single bump and bounced along my way back to the hospital, just three measly days since I had been released.

Now I was so out of it that I truly do not know what all the tests they did this time around, all I knew was that I was out of it.

Anyhoo, apparently in the middle of all my cancer drama another body organ decided she was being ignored and was not going to stand for it anymore.

I had my gall-bladder removed.

Yep. The gall-bladder wench was angry, so she went bah-bye.

No other body parts have my blessing to fall apart on me. I already have metastatic breast cancer. That's enough folks. More than enough. Body? You'd better be listening to me, cuz I mean it dog-gone-it!

Well that was pretty much my month of June, in the year of our Lord two thousand fourteen.

Thank heavens that is over.

But now I'm doing something even scarier (for me).

Yep, the oncologist decided that because the cancer had basically crushed my vertebrae: L3 and L4, which resulted in me needing a back fusion, that we also needed to do something "more."

So I've got two doses of chemo under my belt and I'm not too sick! Which is very good news. Which also means I think I just jinxed myself.

No this poison should not make me lose my hair nor toss my cookies.

I've only thrown up once.

Oh yeah, back to the hair.

Well. The "second" hospital visit, or as I call it, the gall bladder eviction visit had another serious and horrifying consequence.

They do have a lot to do, and a lot to remember to do for a goodly number of patients.

But when a patient is sooo out of it that she (or he) cannot think for herself (or himself)? Then sometimes the nurse needs to THINK for the patient.

I went into the hospital with long, slightly grey-highlighted, black hair.

I came home with long, slightly grey-highlighted, black, matted hair like a dog.

I kid you not.

I had no clue and I wish that at least a nurse had reminded me: "Oh, have a friend or your husband comb your hair, if you haven't been doing it on your own."

Because I hadn't been doing it on my own.

And it was disgusting. I could not believe the number and how huge my matted knots were. How did this happen? How could this have happened?

How could I have let this happen?

I'll tell you how.

I was fuzzy minded to the nth degree. I had a terrible time even forming thoughts during that second visit. The fuzzy just wouldn't go away! Maybe having gone under general anaesthesia THREE times in two weeks time? Maybe that had something to do with it.

My second day home from my final hospital visit, I went to a hair salon and the only solution?

Chop it all off.

And now I am sporting an incredibly short hair style. I haven't had hair this short since I was a young girl!

I'm not angry at the nurses, but so very saddened that this happen.

So that's how Quirky got her hair cut.

The future holds many unexpected things.

And evolution? Not all that it's cracked up to be.

I never imagined myself "evolutionizing" into such a short do! 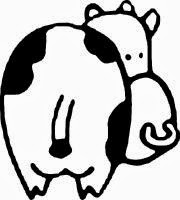